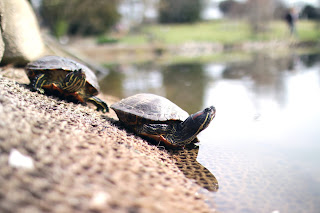 When I was maybe seven, I was visiting my grandma. I visited her often, as she lived across the field from me. We had noticed a turtle walking through the gravel of the driveway. Both of us being interested in all things nature, we went outside to get a closer look.

It was just moseying along. We watched it for a while then retreated back to the dining room. Grandma couldn’t stay out for long. She owned a boarding home for people who needed a little more help than they could get on their own. Her residents, as she called them, couldn’t be left alone for very long.

A while later, I glanced out the big picture window which faced the southern sky and the tall white pines towering over the house in the front yard. I noticed the turtle was digging a hole with its hind legs.

“Grandma!” I said, not taking my eyes off the turtle. “It’s digging a hole in the driveway.”

“Is it?” she said, blowing out a puff of smoke that she had just inhaled from her long, thin brown cigarette.

Holding the cigarette between two fingers, she punched the ashes aside so she could rest the burning cigarette in the ashtray. She stood up from her chair on the north side of the dining room table and walked to the door. The inside door was propped open allowing her to see the turtle's action throughout the screen door. “Look at that,” she said.

“That’s what turtles do before they lay their eggs. I’ve seen it before when I was younger.”

“It’s a mom turtle? How does she know where to lay her eggs?” I asked.

We continued to keep our attention on the turtle until she had covered the eggs and walked out of the yard.

I quickly became interested in turtles. I asked my mother if we could go to the library so I could learn more about turtles. This was a number of years before the internet and cell phones had come into our lives. My mother loved the library so she convinced my dad to bring us there.

Grandma had found some small cedar fencing that might be used to mark the edge of a garden.  She placed this around the site to protect the eggs which remained safely under the earth.

Our biggest question was when will the eggs hatch? The book wasn’t too clear on that. Every day we waited for something to happen.

What seemed like a few months went by. We began to wonder if the eggs were still okay.

My grandma couldn’t wait any longer. She went to the kitchen to fetch a butter knife.

“I’m just going to dig up around the eggs a little to see if they are still in there,” she said.

I watched as she clumsily poked the knife around in the gravel. My grandma could have been retired years ago, but for reasons unknown to me, she continued to work. She was in her late sixties, but she looked older than that as she had smoked cigarettes for most of her life. It wasn't easy for her to bend over, but her curiosity helped her out.

It wasn’t too many stabs later that it happened. As she pulled the knife back out, an orange-yellow yolk poured off and dropped to the ground.

I remember feeling as if I had been hovering above the ground, looking down at the circle of protection, the circle my grandma had built intentionally to keep the young turtles safe. As I saw the dripping yolk falling from the dull silver butter knife, I landed on my feet.

Neither one of us said anything. We just stared in disbelief.

It was the first time I remember being afflicted by life. I didn’t stop her. Neither of us thought that far ahead.  I might have had some inklings of thought, telling me that this was a bad idea, but I can’t be sure. I would only hope I did. If I did, she was my grandma.  She was the smartest woman in the world, besides my mother of course.

I don’t think any turtles ever emerged. Looking back, it seems that no matter what outer barriers one erects to ensure protection, it is useless against one's own inner temptings.

The ironic part is that her infamous words were, “Wait now, wait now.” She wanted people to stay just a little longer.

This is an interview with Al Lipke, former interpreter for the MINOS, CDMS, and NOvA-experiments conducted in the Soudan Underground Laboratory.